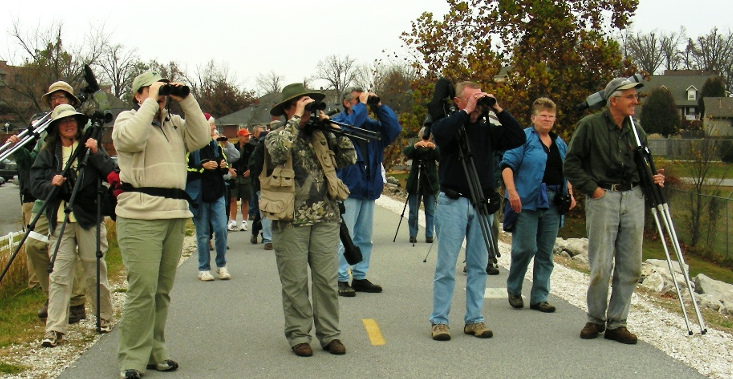 The Northwest Arkansas Audubon Society is a registered non-profit organization serving the four-county region of northwest Arkansas -- Benton, Carroll, Madison and Washington counties, committed to Preserving the Natural World in Northwest Arkansas through Education, Environmental Study and Habitat Protection.
Follow us on Facebook and on our Blog
(Click on the menu icon, top left of this page, to navigate this website.)


Please Note: With continuing COVID-19 concerns, plus our priority to keep members of our birding community healthy and safe, Officers and Board members of the Northwest Arkansas Audubon Society (NWAAS) have decided to SUSPEND all monthly field trips until further notice.
Covid-19 cases are still increasing in Washington and Benton counties, so we will also cancel our annual July membership meeting and program.
Due to the necessity of maintaining social distancing, it is not feasible at this time to hold large group activities.  If and when conditions improve, the Officers and Board will reevaluate this decision.  We will keep you posted.
In the meantime, NWAAS has a list of recommended places to bird in Northwest Arkansas posted on our website at http://www.nwarkaudubon.org/placestobird.htm.  Please feel free to contact Joe Neal, field trip coordinator, if you have any questions about birding spots. You can still get out, go birding.  Just remember to follow social distancing guidelines.
Also, now is a great time to enjoy your backyard birds. This won't last forever.
NWAAS Officers and Board

Check out Bird-Sounds.Net - Recently added to our links page.

Check out the 2017 Halberg Ecology Camps 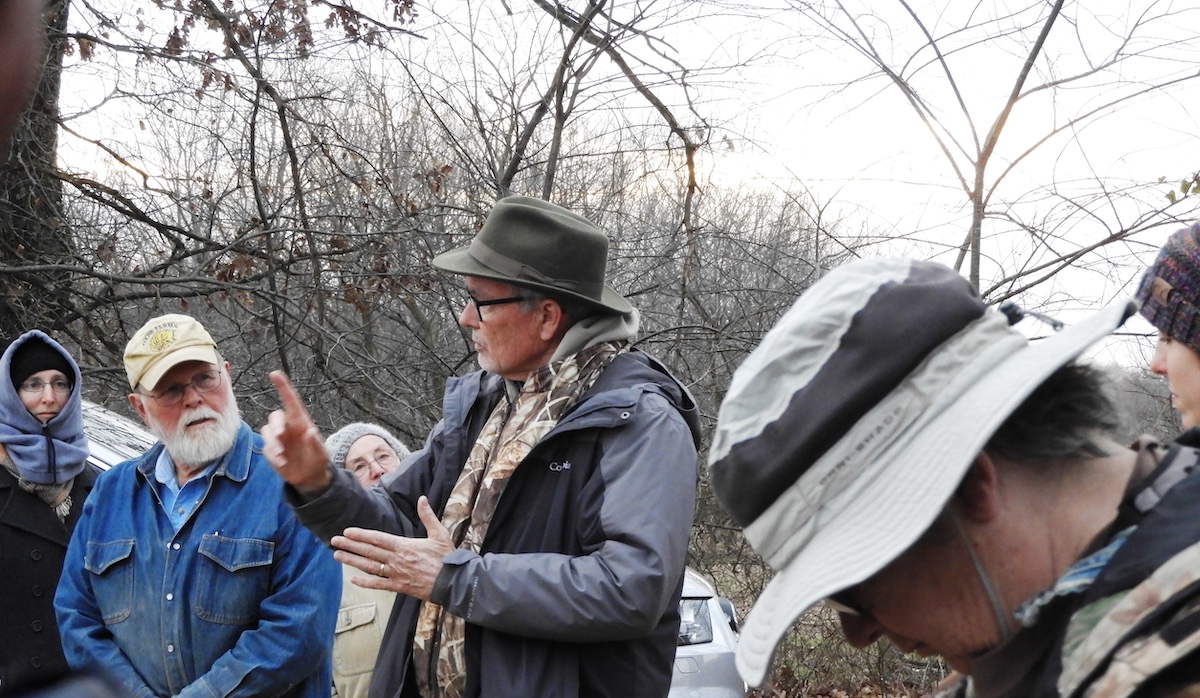 Douglas Arthur James was born on July 25, 1925 in Detroit, Michigan. His parents were Arthur Collins James and Sigrid Elizabeth Hovey. His first marriage was to Frances Rowe Crews. Their three daughters are Sigrid, Helen, and Avis. His second marriage was to Elizabeth Mary Adam on July 25, 1985. He passed in Fayetteville, Arkansas, on December 17, 2018.

As a kid Doug was active in a Boy Scout troop that emphasized bird watching. During elementary school he led field trips near the school. First to catch his eye: American Goldfinches in a shrubby field.

He received his Bachelor of Science at University Michigan, Ann Arbor in 1946 and Master of Science in same place (1947). His PhD was from University Illinois, Champaign-Urbana in 1957. He focused on the ecology of roosting blackbirds under direction of avian ecologist S. C. Kendeigh. Doug’s blackbird roost counts always added valuable data to Fayetteville Christmas Bird Count that he initiated in 1961.

One of Doug’s graduate school classmates was James Watson who would become part of the team that worked out the structure of DNA and shared the Nobel Prize in 1962. When Watson came to visit Fayetteville in May 2005, Doug joked “We both aspired to be ornithologists. I made it. He didn’t.”

Doug came to the University of Arkansas-Fayetteville in 1953. He started as an Instructor and achieved status as University Professor in 2004. At his retirement in 2016, he had become the longest serving professor in University history.

During his career he was a Fulbright Scholar in Ghana (1970-1971), Nepal (1981-1982), and Belize (1988-1989). He used his Fulbrights to expand studies of scrubland birds. In the Fulbright tradition, quite a few students from foreign countries eventually worked on degrees in Fayetteville under Doug’s direction. His three Fulbrights are unique. He totally understood importance of people from different countries getting to know and learn from one another. Internationalism was a passion for him.

Doug was drafted during the Korean War. He served in the US Army (1954-1956) as Research Associate in US Army Chemical Corps at Pine Bluff Arsenal (Arkansas), where he conducted numerous bird research projects. Later, he worked at the US Atomic Energy Commission (1974-1976) where he served as a general ecologist in Division of Biomedical and Environmental research.

During his more than 60 years at UA-Fayetteville, Doug taught courses in general biology, vertebrate biology, ornithology, mammalogy, animal behavior, and ecology. The leading authority on birds in Arkansas, he was senior author on Arkansas Birds, published in 1986 by University of Arkansas Press.

In the Encyclopedia of Arkansas, his colleagues Dr Ragupathy Kannan and Dr Kimberly G. Smith considered him “one of the state’s leading conservationists in the second half of the last century …”

Doug participated in scientific meetings all over the US and many foreign countries and made 300 presentations. He was major professor to more than 50 students working on Master of Science degrees and 30 students working on PhDs. He was author and coauthor on more than 110 scientific publications, president of Wilson Ornithological Society 1977-1979, and Life Member of major scientific organizations in ornithology and ecology.

Northwest Arkansas Audubon Society was started by his students in 1978. He was an officer in NWAAS several times, including election as President in December 2018. He served on the board of Fayetteville Natural Heritage Association over ten years, including efforts to protect forests on Kessler Mountain where he lived for many years. FNHA gave Doug its 2011 Golden Acorn Award “for sharing his enthusiasm for the natural world with his students and his many friends over a career spanning several generations and continents. He has nurtured countless natural scientists, amateur ornithologists and conservation champions.”

In the late 1960s he organized the US Fish and Wildlife Service Breeding Bird Survey in Arkansas and ran the Compton survey in the upper Buffalo River region. He found time for numerous other projects. There is a wonderful photograph of Doug holding a Trumpeter Swan as a volunteer helping Arkansas Game and Fish at Holla Bend NWR in February 2010. The big swan was quite an armful for a veteran ornithologist in his 84th year. His involvement with Ozark Society and protection of Buffalo National River is recounted in Neil Compton’s book, Battle for the Buffalo River.

Doug enjoyed life and shared it with everyone around him. He and Elizabeth enjoyed ballet, opera, and art galleries. He loved all kinds of dancing. He liked to drink beer and sit up late with friends.

He loved baseball and enjoyed listening to games on his radio. As a kid, his dad took him to see Babe Ruth play at Tiger stadium in Detroit.

No one who went on a Doug James class field trip to the Texas Coast returned home without Whooping Cranes in their yellow field book. For many, this trip initiated a lifelong interest in birds.

His favorite bird family was the Sturnidae that includes our local European Starlings, but also includes mynas and many other colorful species. According to Doug, “They are so beautiful, so iridescent, so many species. They rival hummingbirds in colors.”

He loved gags. He once wore a Hog hat to drive off the stage long-winded speakers who exceeded the allotted 10-minutes during an American Ornithologist meeting in Fayetteville.

Doug required graduate students to avoid using words like “reveal.” Reveal, he said, was appropriate in religion, but not science. Data collected in field research might support or help reject a hypothesis, but didn’t reveal anything.

Doug loved running. The home he shared with Elizabeth was eventually filled with ribbons, statues, trophies. His old running shoes served as boots for field work. 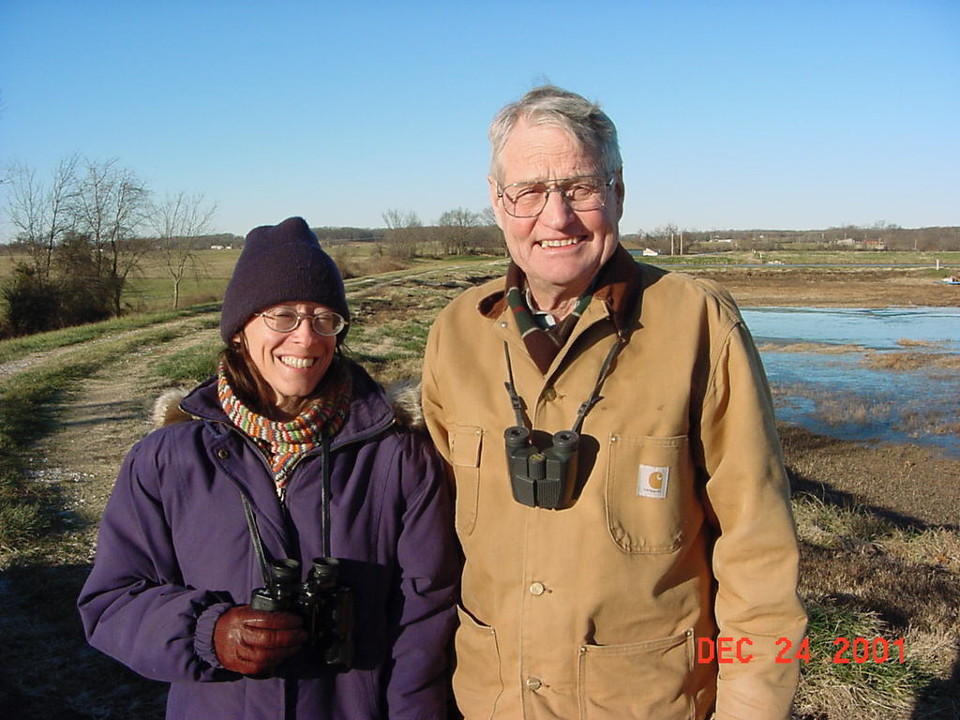 Doug and Liz James at Centerton 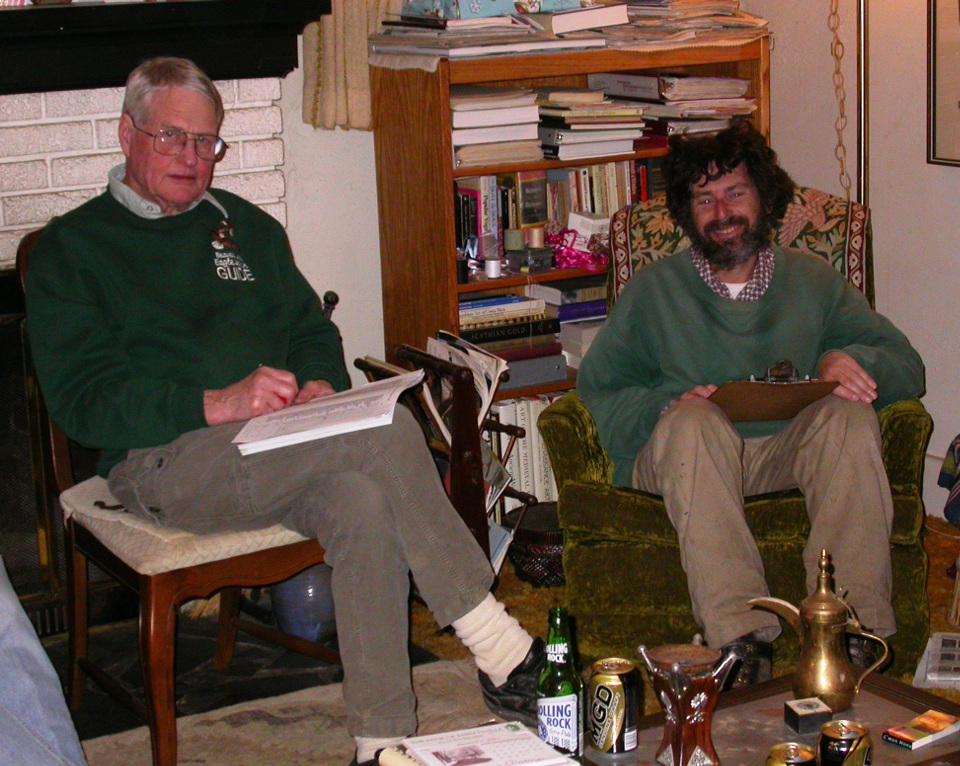 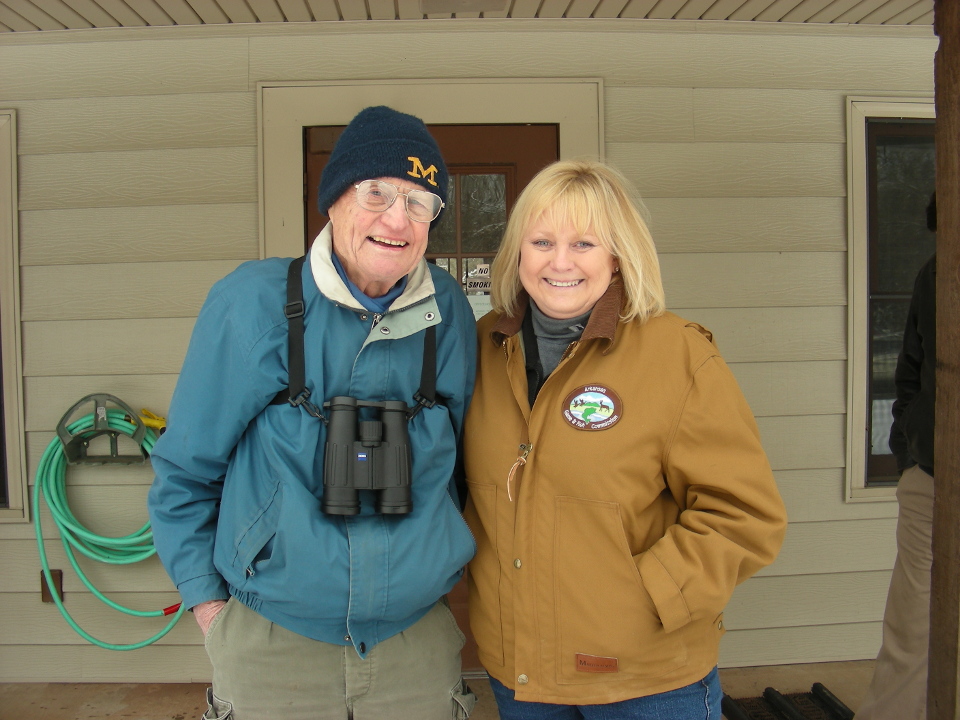