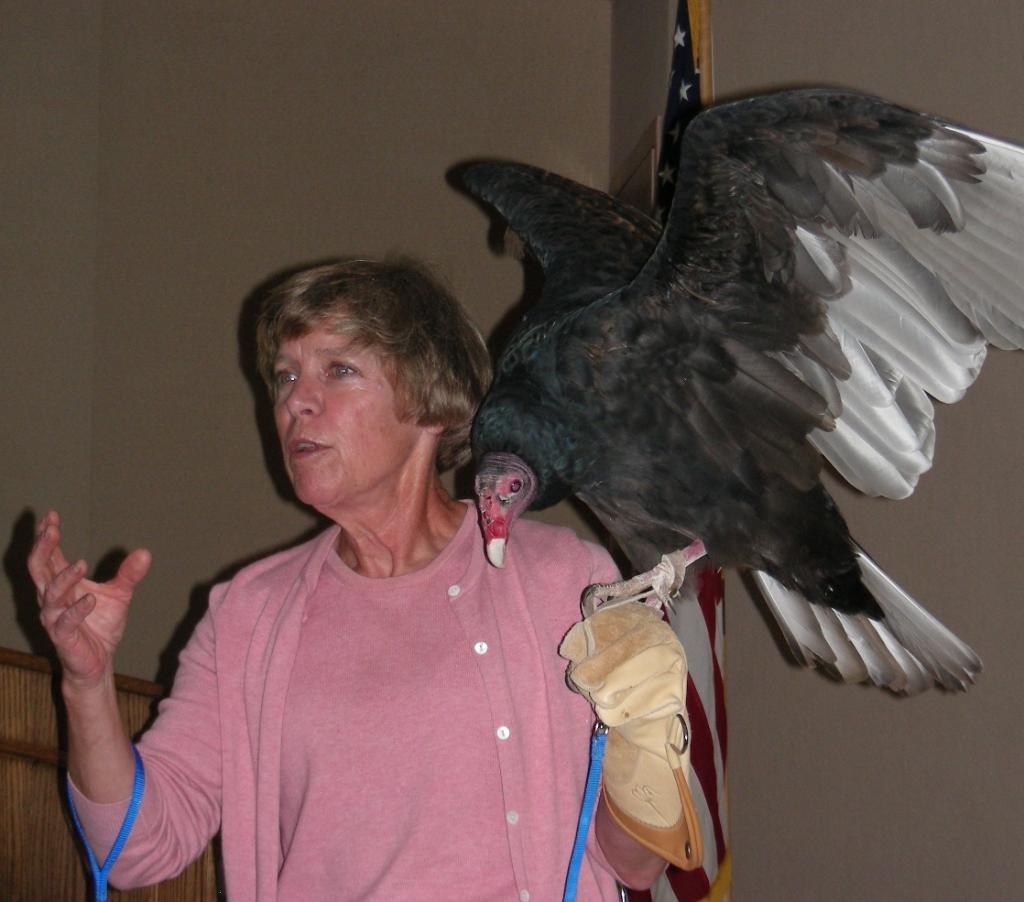 Lynn Sciumbato of Morning Star Wildlife Rehabilitation Center near Gravette brought her big birds to Shiloh Museum in Springdale yesterday. The occasion was Northwest Arkansas Audubon Society’s annual program of nature photography, conversations with bird guys and gals. She shared an hour of fact and humor concerning birds and people. A mesmerizing story teller, Lynn has a real tale to tell about northwest Arkansas and big birds to tell it with.

The core of these stories revolves around individual personalities of birds. With her favorite bird, a Turkey Vulture name Igor literally in hand, she shares Igor’s story, which began 11 years ago, when Igor was one day out of the egg. With the successful humorist’s pregnant pauses, voice inflection rising and laughing, facial features varying from remarkable to quizzical and natural timing—that chuckle or sudden silence— we learn Igor is not a buzzard and how calm Igor is compared to many other big birds.

As Lynn puts it, some want raptors want to tear you up, but Igor and his kind just sort of look at you and say “duh…” Then she moves on to hawks and owls.

Of yes, did I mention she is an expert, with decades of experience working with all kinds of raptors, song birds, small mammals, and the odd reptile that has come her way? And a retired school teacher?

She brought Ginny, a 7 year old Red-tailed Hawk. Lynn calls her the “diva bird…nothing makes her happy” and we soon have Ginny’s story. She was hand-reared for falconry and treated then like a queen. But she lost her exalted status in life in a hunting accident. No longer able to fly, the usual outcome is to be “put down.” Instead, Ginny came to Morning Star. Today Diva Bird shares the limelight with Igor. Lynn explains Igor and Ginny also share a cage. Maybe the vulture “duh” will wear off on the dethroned diva.

Nancy Harris from Fayetteville asks Lynn how she protects herself pecked in the face and really hurt? Lynn responds, “Well, do you want to see the scars [much laughter]. As a matter of fact…I don’t really scar…Owls and hawks don’t think to bite. That’s not their first response…this beak is like their knife and fork. It’s for ripping food apart…” Now she segues to difficulty handling really BIG birds, like Bald Eagles, that can get you.

She recalls release of a rehabbed eagle at Beaver Lake. “I was fixing to throw her up in the air and she ripped all the side of my face…I was fixing to fling the bird so I went ahead and flung her… [pause, then laughter] for SEVERAL reasons.” Then she mentions something more common: puncture wounds. “Ah, puncture wounds. You don’t get much sympathy for puncture wounds. They don’t bleed near as well as rips from eagles…” She remembers something else, too. “I have been hurt worse when bitten by a cardinal. Really and truly. I mean, that brings tears to your eyes. They always get you right there…” indicating the sensitive flap of skin between the thumb and forefinger.

Before you get the idea that Lynn is just a skilled talker – she’s certainly that – let me mention what a skilled observer she is as well. I noticed that Ginny didn’t have much a “belly band,” a dark band often seen on mature Red-tailed Hawks. I asked about this. They don’t all have it, she explained. In fact there is a huge amount of variation. She recalled a time in the early 1980s in Decatur, at the mega-center of Arkansas’s poultry industry.

“They had this huge hawk die-off at this one farm. They were finding hawks everywhere, you know, down or dead. Game and fish called and said, ‘Do you have room for about 25 hawks?’ I said, ‘LUTHER! WHAT!!!???’ There were all these hawks that had gone down on this one farm and we didn’t know what the deal was. We had no idea why they’d all gone down. Finally figured out it was ‘poor poultry husbandry.’ This one farmer had dumped three truck loads of dead chickens. As the predators had gone down towards the bottom, there was botulism…and everybody who was working this pile of dead chickens was dealing with this botulism…I think I got in all totaled 26 hawks…I think 24 of them survived…”

Every bird she gets is an individual. And Lynn is that rare “bird” herself: an unabashed raconteur finding interesting fact and humor at every turn. We’re just fortunate she long ago chose birds in trouble as her source of inspiration.